You are here: Home > About us > Gender pay

The Gender Pay Gap Report 2021 provides us with a valuable opportunity to take a step back from the business and consider how we are progressing on the important topic of gender equality.

This is the third year we have published our Gender Pay Gap information. We take equality, diversity, and inclusion seriously at System C Healthcare. Aligned to our people strategy, we continue to create an environment that provides equal opportunities to all colleagues and provide fair pay and a competitive and creative benefits package. As the business continues to grow and evolve, we strive to recruit and retain the very best people, regardless of ethnicity, gender, disability, and age. Equality in the hiring process and equal treatment in terms of pay and progression are central to this.

In 2017, the Government introduced legislation that made it statutory for organisations with 250 or more employees to report annually on their gender pay gap. This report fulfils the department’s reporting requirements, analyses the figures in more detail and sets out our progress to date and what we are doing to close the gender pay gap in our business.

We are pleased to report that our performance on pay is considerably stronger than the national and sector averages. Our gender pay gap is significantly less than the 2021 national mean average of 14.9% and national median average of 15.4%.

Our median gender pay gap across the company is -1.3%, which means that women are paid on average 1.3% more than men. It’s encouraging to see how close these numbers now are. It is testament to the hard work that the company has done to close the gap.

Our mean gender pay gap is 6.1%, which is lower than the 10.5% average for our industry sector. The blue box at the bottom of the page provides an explanation of the difference between these two calculations and the underlying significance. 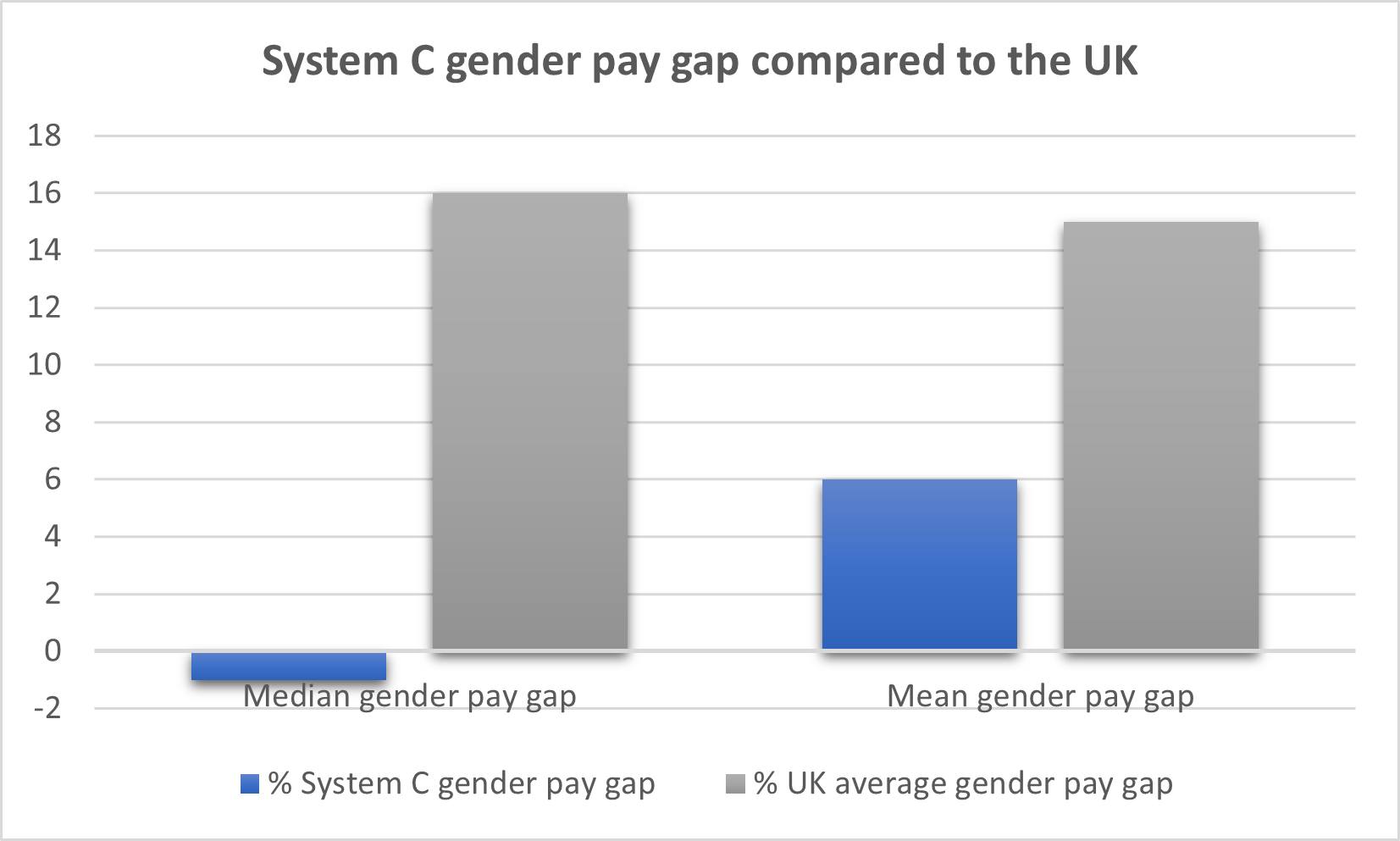 We are also committed to recognising the contribution made by everyone to our business, irrespective of role and seniority. For that reason, a percentage of our profits are distributed as a bonus to everyone in the company.

The company again paid an annual bonus to employees on the basis of its performance in the financial year 2020/21, the period covered in this report. However, as the actual bonus payments were transacted after the reporting period, these bonus payments are not included in this year’s gender pay analysis. They will feature next year.

One of the biggest challenges we face as a technology company is the national shortage of women who have qualifications in STEM subjects (science, technology, engineering, and mathematics), and the imbalance in the numbers of women working in tech. This national problem contributes to the under representation of females at all levels in our organisation, from the lower quartile through to the upper quartile, but is at its most pronounced in the upper pay band. The three-strong executive team consists of three males (including the two founding directors). The composition of the operating board is broadly even, with 3 males vs 2 females.

There is clearly still progress to be made. For example, there are fewer women in the upper quartile pay bands this year, due to several senior female employees either retiring or moving to other companies. Having said that, the percentages have remained fairly constant across the other pay bands, and there has been a decrease in the number of women in the lower quartile pay bands – 36% this year, compared to 40% in 2019/20. We will continue to instil equality throughout all of our recruitment and retention strategies in a bid to reduce these gaps further.

What are we doing to improve our performance?

Our gender pay performance reflects the fact that we treat people equally, irrespective of gender. We will continue to focus on gender equality across all our policies, looking at the recruitment, development, progression, and retention of employees, to ensure that we maintain our progress in this area.

One of our primary aims is to improve the proportion of women at all levels in the organisation, and in particular to increase the numbers of women coming forward as software developers. This is inevitably a long-term strategy which we are trying to address through a variety of different means. These include a focus on career progression and promoting from within as well as on agile working. We are setting up a graduate recruitment programme which we hope will reflect the gradual increase in the numbers of females studying STEM subjects nationally and which, over time, will help us increase the proportion of females at all levels and in all roles within the organisation.

We also continue to work strategically through partner agencies – through our relationships with techUK , for example – to highlight and address the bigger issue of the structural gender imbalance in our industry.

+ Definitions at a glance

Mean: The difference between the mean (average) hourly rate of pay (or bonus) for all men and all women.

Pay quartiles: Calculated by ranking all employees’ hourly pay in numerical order and dividing them into four equal size groups.

Median averages are useful to indicate what the ‘typical’ situation is i.e. in the middle of an organisation and are not distorted by very large or small pay rates or bonuses.

Mean averages are useful because they place the same value on every number they use, giving a good overall indication of the gender pay gap, but very large or small pay rates or bonuses can ‘dominate’ and distort the answer.