With a population of just over half a million, East Sussex covers an area of 1,725 square kilometres (660 square miles) and is ranked the highest of all 35 counties in England for percentage of the population aged 90+ and second highest for 75+ and 85+. East Sussex is a high performing authority. In 2014/15 East Sussex Adult Social Care were in the upper or upper middle quartile for c. 60% of the ASCOF outcome measures. East Sussex performed particularly well in the areas of self-directed support and direct payments and in offering effective re-ablement services. In the Adult Social Care Survey, East Sussex clients said that services made them feel safe and responded positively on questions relating to their quality of life.

A number of social care staff from a variety of Adults’ Services departments including Mental Health, Hospital and Learning Disabilities Teams were selected to input the equivalent case data on both the Liquidlogic and the legacy adult social care systems. One ‘control’ person was used in the exercise who was a new user to both systems. A second control person had a good knowledge of both systems but was not a regular user of either. All the other staff who participated in the sessions, were experienced users in the legacy system but most were using the Liquidlogic system for the first time, and some had never seen it before at all.

Service Development Manager, Frood Radford says: “We were confident that our tender process was absolutely meticulous and that the Liquidlogic system would bring many beneﬁts including time savings. However, we wanted to quantify just how much practitioner recording time could be saved. To make the trial fair, we decided that a number of different teams should be involved from those in the Contact Centre to Hospital Teams. We also felt that more than one social care scenario should be tested. Most importantly we wanted to test our former social care system which the users were familiar with and ensure that we had their buy in with the Liquidlogic system.”

Scenario 1
A client presents with relatively simple, low level needs which are met with simple services and without the need to generate a personal budget.

Scenario 2
The same person re-presents with a higher level of need which requires a reassessment to be completed before a support plan can be created.

Scenario 3
The same person re-presents with more complex needs. The client requires a re-assessment to generate a new personal budget before a support plan can be created.

The three scenarios were given to twelve practitioners across different teams to fully test both systems. Overall users averaged a 22% time saving with the Liquidlogic system and feedback from all users involved was extremely positive. This 22% time saving was despite the Liquidlogic system having being conﬁgured by East Sussex with a longer overview/RAS assessment than in the legacy system, and further time reductions would have been likely if this had been normalised.

Speaking about the implementation of the Liquidlogic System one practitioner from the Complex/Long Term Conditions Team comments: “The Liquidlogic system is much more intuitive and not so repetitive and everything is done once.”

The following question was posed to the twelve staff who participated: “On balance do you believe that once you are familiar with the new system it will assist you to spend less time recording on the computer than you do now?” Every respondent said ‘Yes.’

“It is a more logical process.” 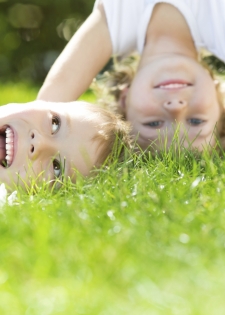 Image of children playing outside